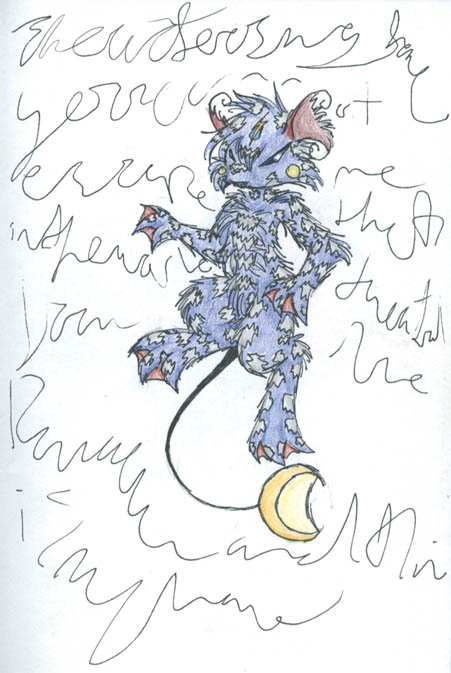 Desc: The Ranachu is about the size of a tiger, and many of its movements are the same. This creature, completely covered in silver-striped, deep blue fur, spends most of its time in water. Its eyes can vary in color, but mainly reflect the kind of light the water that the Ranachu lives in gets, from faint bluish-silver for more moonlit pools, to black for pools that get no light at all, to light blue for sunny areas, and so on. They almost alway stay around the blue range, keeping that shade in various degrees. The Ranachu's paws are webbed, allowing it easy passage through water, and its crescent-moon like tail has a web between the edges as well, and is used also to propel it along in when its in a hurry. The edges of the moon are sharp, and are often used to cut the underwater seaweed that the Ranachu feeds on. The fangs that are often common with the Ranachu are primarily used for defense. Its ears are also webbed as well, and are mainly folded back for greater speed underneath the water. They are, however, very sensitive, and the Ranachu can sense disturbances in the water it resides in in seconds, and get to where the disturbance is in even less.

The Ranachu (and so some say, the Manachu) both evolve from another, seperate Pokémon called a Nekochu, although no one is quite sure how the evolution takes place. Although solitary by nature, some Ranachus have been known to associate with other Pokémon (notably, Torrent, the vassel of the Manachu underneath Mt. Moon) and are quite civil at times. However, the Ranachu does not generally appreciate others, and doesn't appreciate people messing with where it lives, which is commonly how trainers encounter the Pokémon, by stopping to drink from water or dabbling their feet in for a moment.

The Ranachu's moves have never actually been categorized, as they are exceptionally rare and hard to catch, but most of them are thought to revolve around its dual electric/water nature. One move that is known is a specialty of the Ranachu, which allows it to recover all of its lost hit points if it's near a body of water.

The Ranachu lives solitarily and guards a single pool of water. However, once a Ranachu has decided to mate or have children, its family will inhabit the water until they are old enough to move on. Ranachu mate for life, and once they choose who they wish to mate with, they will never choose another, even if they are killed or lost in some way. Their devotion to their mates has lost them many of their kind, but a pool constantly protected by two or more Ranachus is an extremely well protected place.

It's believed that a large number of the Ranachu inhabit the deeper portions of the ocean. Their lungs are large enough to hold air for long periods of time, and under duress or extreme circumstances they can breath water for a few moments, enough usually for them to escape. However, doing this greatly weakens them. More often then not they store anything they find valuable or important in deep, underwater caves, and make their dens close to the water, perhaps under an overhang of some sort. They are wonders at camoflauge, as their stripes, although usually silver to help match the refractions of light in water, can also vary in color as well.

Their children, usually referred to as kittens, are usually born in litters varying from two to five, and both parents care for the little ones equally. The Ranachu's genetic code is interesting in the fact that, if bred with another Pokémon, its half will replace segments of the other species, therefore producing kittens that can have any number of strange traits from both parents. No two kittens born from such a union will look alike, but most Ranachu are somewhat xenophobic, and such pairings are very rare indeed.

Ranachus want to retain their privacy, and hate others, especially Pokémon that don't agree with their type or their strict rules about their homes. They usually want to be left alone. They naturally gravitate towards other water types, mostly neglecting their other half, and rarely spend time out of the water at all.

The Ranachu has been in Radic and Red, Continuum, Howl of a Growlithe, and a A Puppet without Strings.

The Ranachu has been mentioned in Nemo Me Impune Lacessit and others.