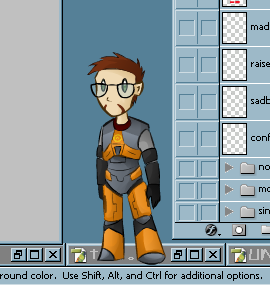 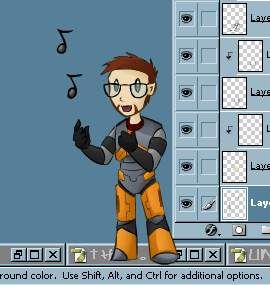 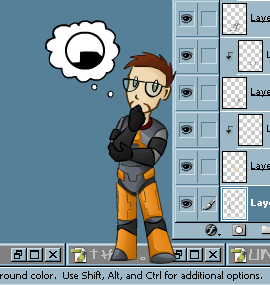 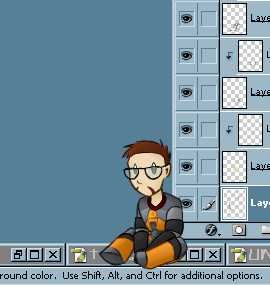 A FLELE is a little character that sits on your desktop and sings for you! It's not the most in-depth or fancy MP3 player, but it's certainly the cutest, haha. There are lots of different characters you can use for FLELE (called Shells), but this one's of Gordon Freeman! He's a little unique for a FLELE shell in that he has a lot of idle animations where he'll sit or nap or have little Half-Life thoughts, and his arms move randomly while he sings!

Without getting too into the details of it, FLELE runs using a free program called SSP. There are a few different tutorials on how to install SSP+FLELE, but basically...

Here are his buttons, you can double-click these to make him do different things. 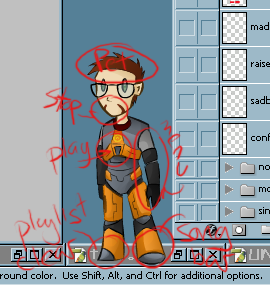 Play - Chest
Stop - Mouth
Menu - Left arm (this isn't the same as the right click menu above, this is specifically for the FLELE music player itself)
Songbar - Left foot (a song bar is a little mini bar showing the song you have playing, you can double click his foot to see what I mean)
Clear playlist - Right foot


You can also pet him by moving your cursor back and forth over his head! You don't have to click, just move the cursor.

You may have noticed that the menus in FLELE are in Japanese, but I translated them into English! You'll have to patch FLELE yourself with the translation, but it's not too hard! Here are the steps:

This specialized 1.dic file has unique dialogue for Jockey and Gordon when they're the FLELE shells! You may notice if you have a lot of other shells.

As one last note, if you right-click Gordon and the big menu is in Japanese, go to choose language (fourth up from the bottom), then go to English, then restart SSP. It might make things easier for you if you get into any further ghost shenanigans, haha.

If you're interested in SSP and little desktop doodads like these, I wrote up a big site about them with a ton of information. FLELE is a ghost/ukagaka, but it's only one type of ghost that's set up to be a music player. There are many different kinds of ghosts that can do lots of different things! For more information, you should check out the pages I've made for the ghosts I've done - Hunter and Smoker, Gaster, Temmie, and Radic and Farns. There's also a webring for ghosts!

I don't have a vid of me playing with Gordon specifically, but here's one with Jockey so you can get an idea of how FLELE works.